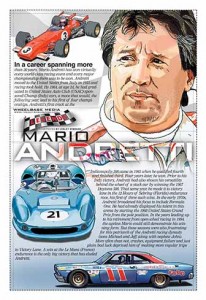 Don’t wait for stories to appear in the store when you can become a member of Wheelbase Media’s weekly news service and save more than 50 percent while gaining instant access to the new features as they’re produced.
Click here to get started.

If you are not a member of the media, but still wish to check out some of our stories online, visit www.theoctanelounge.com, which is owned by Wheelbase Media.

In a career spanning more than 30 years, Mario Andretti has won virtually every world-class racing event and every major championship there was to be won. Andretti moved to the United States from Italy in 1955 and racing took hold. By 1964, at age 24, he had graduated to United States Auto Club (USAC)-Sponsored Champ (Indy) cars, a move that would, the following year, lead to his first of four championships. Andretti’s first crack at the Indianapolis 500 came in 1965 when he qualified fourth and finished third. Four years later, he won.